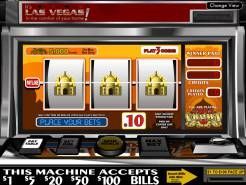 Play Now
Online slots use a wide variety of themes to inspire the action on the reels. While Triple Crown might make you think of royalty or something similar, the actual theme in use here is an Arabian Nights-style theme. You get to choose from a wide view or a full view of the reels, so you’ll need to make your selection before you start. We preferred the wide view – will you agree?

This slot is a ‘reel’ classic, providing three reels and just one payline for you to play with.

Two cents will be the lowest amount you can play per spin. Since there is but a single payline here, the max coin value is higher than is the case for other Betsoft slots with more reels and paylines, topping out at a dollar. You can play up to three coins on the line with each spin.

Since this is a basic slot, you don’t get any special symbols in play. There is an odd yellow symbol that pays out for one, two or three of them, but it’s so small you can’t really tell what it’s supposed to be. The best payout comes if you get three of the Triple Crown logo icons appearing across the payline. If you are lucky enough to get this, you will win the relevant jackpot for the number of coins you played. This is either 1,000, 2,000 or 5,000 coins depending on whether you opted for one, two or three coins.

As you’re probably already aware – or you at least have an idea of – there are no bonus features in this slot, since it is rather basic in its nature. It does look good though.

Despite its basic nature, this is still a slot worth looking at. We liked the choice of viewing screens, and you have the ability to change from one to the other during the game to, in-between spins at least. Just click the button to the top right of the reels, which is easy to spot. While the odds of scooping a jackpot are going to be quite long, there are several other prizes of lower amounts that can be won. How far up the paytable will you go?
Play Now