Are You Prepared for a Dash for Cash? 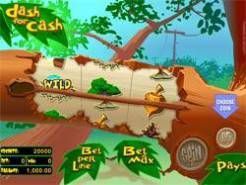 Play Now
Some people find the classic slots – i.e. those with just three reels – to be a bit basic for their liking. However, we’d suggest you hang fire for just a moment if that would normally include you. This is because you have the Dash for Cash slot to take a look at, and it comes to you courtesy of Betsoft Gaming. Why do we ask you to take a look? Simply because this is a really good-looking game!

Well, we already told you this game has three reels. It also has just the one payline, but it looks good because the game is designed to reveal the payline on a branch. The game is also in 3D which makes it look even better.

How would you like to choose a bet of between five cents and $15 before you take this game for a spin?

Special symbols in play in Dash for Cash

Normally you wouldn’t expect to see any special symbols in a three-reel game, except perhaps for a wild. You get one of those here in the shape of just that – a wild word! That at least makes it easy to spot.

If you manage to find three identical Dash for Cash symbols on your tree branch (or payline), you can go into the bonus feature. Yes, the game does have one. You have to try and steer the squirrel to collect as many nuts as he can during the game. There are six levels to this so it isn’t a quick ‘play it and its over’ game. Instead, it provides you with a lot of great fun. When you get to the end of the round, you will hopefully have won a nice cash prize, but of course you have to steer the squirrel successfully first.

Most three-reel games are pretty ordinary, to be honest. They all work in much the same way and they don’t provide any differences other than in color and theme. So it is refreshing to find what we think might just be the best three-reeler Betsoft has come up with. We’d be hard-pushed to find another three-reel effort that is as good as this as well. Have a go today to see if you agree with us on this. We think you will, especially when you’re playing for real money prizes!
Play Now