Embark on Some Gemscapades Today 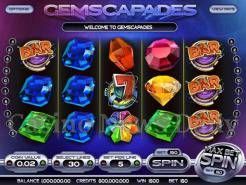 Play Now
Gems pop up with alarming frequency in all kinds of slot games you’ll find online. This is the case in Betsoft’s Gemscapades as well – a fact you may well guess given the title in place here. Mind you, it definitely looks the part. This is no basic slot game packed with basic gems. This one is shiny, colorful and very modern indeed. You will probably enjoy that feature, but there are other things to be aware of as well.

You have 10 lines here, as indicated by the numbers positioned on either side of the five reels in play.

You have quite a lot of freedom to play between two cents and a dollar per line you decide to play. There is also an option to increase your bet from one coin per line to an impressive maximum of 10 coins.

Special symbols in play in Gemscapades

There is a wild in this game. It appears as a multi-gem, which has eight differently-colored segments in it. It can appear on any of the middle three reels, but not on the first or fifth reels. When it does appear during play, it can expand to complete the entire reel it shows up on. You also get a free re-spin when this happens. If you should receive another wild during the re-spin, you can get another re-spin too, so this is a cool feature to have. It certainly makes a change from a regular wild, don’t you think?

The expanding wild is about as far as you get with bonus features in this particular slot. It does seem to show up quite a lot though, which is good to know when this is the only thing to look for. You do have various gems and bar symbols to try and match up, but no bonus round exists, nor do you have a scatter.

So, with a powerful wild in play but little else, will this deliver the goods for you? We actually liked it a lot, but it’s not the sort of game you would probably play for a longer period of time. You have to remember you have the chance to bring up re-spins quite often though, so you do get good value for money in terms of gameplay with this particular slot.
Play Now