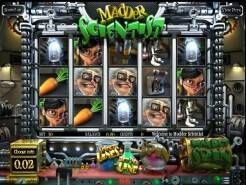 Play Now
Remember the Mad Scientist of the Betsoft game with the same title ? Well, it doesn’t appear as though he has got any better. In fact, while the game theme has arguably improved still further from the original, the scientist himself is madder than ever. Just take a look at his hair! His lab has improved as well, as you’ll see in this 3D slot game.

The sequel benefits from 30 lines over five reels, instead of the 20 in the original game.

The same coin values are used as they were in the original game, with 0.02 as the smallest coin and a half-dollar as the biggest. You can still play up to five coins on every line if you like.

Three beakers will trigger a Click Me feature to award you some instant credits when you click the relevant symbols. Try and avoid the collect message for as long as you can! If you can find three switches, a random reel will turn completely wild. This stays in place for a certain amount of spins as you continue to play.

It’s worth noting you have a chance to respin any of the reels you want at the end of a spin. It costs more, but it could potentially snag some more wins if you are close to getting a good one on the original spin. Furthermore, you have a chance to find some carrots on the reels. It sounds a bit odd, yes, but if you get three or more carrots you have a chance to play the bonus feature. The reason you find carrots is because the mad scientist wants to experiment on them. You help him do this in the round to see what kind of prize you could win as a result.

When you have a chance to play Madder Scientist, you simply cannot pass it up. If you liked the original game we would definitely recommend you try this one, as it’s better than the original. And if you didn’t like it, well, we think you might make an exception for this version. The 3D graphics are superb and it has enough to keep everyone interested. Want to know more? Try playing the game right now !
Play Now