Would You Go Back in Time? 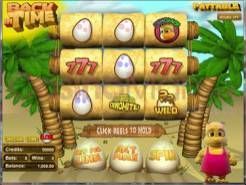 Play Now
The idea of going back in time is a strange one for many of us. In reality, we probably won’t ever get to do this. However, you can try it by playing the Back in Time slot game created by Betsoft. This is a cute game presented in 3D and while it isn’t as big as some of the other games online today, we think you might still like it.

There are three reels in this game and only eight paylines. This makes it a good one for new players who don’t want to bet on too many lines at once, just while they get the hang of it. The game has a 3x3 grid formation in use as well.

You can bet from one to five coins on every line, and you can adjust this through the paytable, which is positioned in the top right of the screen. Coin values go from two cents to 50 cents and are above the small table on the bottom left.

Special symbols in play in Back in Time

There is a wild egg in play here, which is cracked open to reveal two question marks. There doesn’t seem to be a scatter in use in the game though. If you take a look at the paytable, you can see how many symbols are in play and what they might win you according to the bet you have chosen. Another feature is the presence of a ‘hold the reels’ feature. Whenever you spin the reels, you can choose to keep one or more symbols held in place for an additional spin. The great thing is you aren’t charged for doing this, so you get a bonus spin opportunity with each spin!

You’d be forgiven for thinking a game like this probably wouldn’t have a bonus round involved. However, in this case you would definitely be wrong, and that’s great news (we think!). it’s not the only 3-reel game to have a bonus feature, and here you can get into it by finding three rock symbols. During the feature, you can throw rocks at some of the reels and if they match once this is done, you get some instant credits.

What more is there to say? Make sure you get the best of Back in Time today to see if you can win!
Play Now