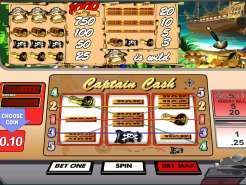 Play Now
Ah now… Captain Cash sounds like a nice guy to meet, wouldn’t you say? While you won’t actually see him while you play this game, you will see where the title comes into play very quickly indeed. He is obviously the pirate who owns the pirate ship that appears at the top right of the screen, and there are various symbols here that relate to the pirating theme. Even the captain himself appears as a symbol, if not in person. The pirate-based theme isn’t exactly new to slot games, as there are plenty of other efforts based on this very theme as well. So, will this be the best choice of all those games, or does it leave you wanting?

This is a three-reel game from Betsoft, and quite a nice one too. That’s because it has more than just the usual single payline to contend with. You actually get five lines to play with here instead.

Fancy betting from a choice of coins worth from two cents to 50 cents? That’s fine – you can do that right here and now.

It probably won’t come as a surprise to discover the pirate acts as the wild symbol here. As such, getting just one with a couple of matching symbols could be very profitable indeed for you. There are bar symbols in the game, but all the other symbols are based around the pirate theme. These include a skull and crossbones flag, a treasure chest and what looks to be a treasure map. Three pirates on the payline will trigger the best award though.

As you may guess from this being a three-reel game, you won’t get the chance to play a bonus level or to snag any free spins from this slot.

All in all, if you’re searching for a solid and reliable three-reel game to play, this would definitely be worth a try. Even though it lacks in bonus features, it does have a nice jackpot to try and land if you can find enough pirates to trigger it. If you have a few minutes to pass, you may simply want to have a go at a different game that is very simple to get started with. This could just be the one.
Play Now