Dive Under the Sea for a Shot at Some Prizes 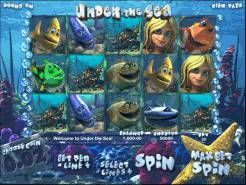 Play Now
Some Betsoft slots are more complex than others, depending on which game you play. Under the Sea has one of the most appealing sets of graphics though, with bubbles rising to the surface of the sea (you can see that at the top of the reels) and sunlight shimmering through the water. But while it looks good, does it have cool prizes to be won as well? Let’s dive in and see what it really has to offer.

You have a chance to spin five reels in this game, and there are 30 lines in play.

Firstly, it’s worth knowing you can bet up to five credits on each line. Each credit can be worth between two cents and one dollar at most.

Special symbols in play in Under the Sea

The pearl in the shell is a wild symbol. It also has a multiplier value according to the number that appear in a winning line. One, two or three wilds will trigger a 2x, 4x or 8x multiplier respectively. The shipwreck is the scatter and two or more of these will win you a prize. Two bring a cash prize, while three, four or five bring you eight, 12 or even 15 free spins, during which all prizes will be doubled in value.

Aside from the free spins, you also have a chance to see whether you can win your way through to the bonus feature. This would be done if you get three treasure chests. When this happens, you get to see how much treasure you can find beneath the waves. The more you find, the more you win.

The look and feel of this game is really what sets it apart from the rest. You really do get the feeling everything is under water, so good are the graphics Betsoft has used here. You can play on autoplay mode as well if you like, which is good to know if you want to have a chance to sit back and watch the action. So give the game a try and see whether you like the outcome. You never know just how much you might eventually win giving the reels a few spins, especially if you trigger the bonus round… where treasure awaits for you.
Play Now