This Slot Game is Out of this World! 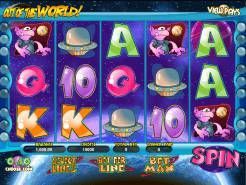 Play Now
Quite literally in this case, since the game in question has that exact title. It’s a little smaller in scope than some of the other games in Betsoft’s repertoire, but you can be sure of having a wide range of cool features to look for when you play. Will this be a firm favorite? Only time will tell, but with an alien theme you can expect to see a game that is definitely from outer space…

There are five reels in play here but the number of lines is limited to nine.

The initial coin value is set at 10 cents, but you can easily reduce this to two cents with a few clicks of your mouse. Similarly, it’s easy to crank it higher to 50 cents, and you can play up to five coins at a time as well.

Special symbols in play in Out of this World

You’d be forgiven for being a little disappointed when you take a look at the paytable. There’s no wild here and the creators haven’t included a scatter either. Moreover, despite the cool theme, there are only two aliens on the reels. The other six symbols are the A, Q and K variety, which is a little uninspiring. The good news is the two-eyed alien could win you up to 2,000 credits for five on a line, while the one-eyed alien could win up to 4,000 credits.

Surprisingly, there is a bonus feature to unlock. To do this, you have to get three spaceships on the reels. When this happens, you can fire shots at the spaceships in front of you. Hit as many green aliens as you can while avoiding the red one, which will end this feature.

Download and play Out of this World slots today!

This is definitely a more basic game, perhaps a little more so than we would have liked. It’s good to have some exciting features and while there is a bonus element here, you cannot win any free spins. So all in all, you may find the game is good to play for a short time, but you probably won’t want to play it for an extended period. Betsoft has some stunning games that focus on 3D elements, and that’s not the case here. But if you love aliens, it might be worth a shot.
Play Now