Get Ready for Some Drama with the Slots Angels 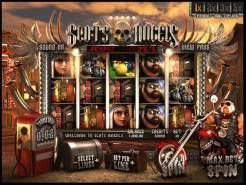 Play Now
The Slots Angels don’t have anything to do with Charlie’s Angels, the famous TV show from the Seventies. Instead, it’s a take on the Hell’s Angels bikers, and you’ll love the detail on your screen as you load up this set of reels. One of the bikers is in the bottom right of the screen and you can spin his front wheel to spin those reels. But what can land on them and what are the symbols worth?

This is yet another five-reel slot in the Betsoft armory, and it packs in 30 lines in this particular instance.

You have a good few options to choose from here, depending on the kind of budget you’re playing with. For example, you can get started with two cents on each of the lines, and you can bet up to five coins per line as well. If you want to go for a bigger coin value, the upper end is a dollar.

Would you be surprised to realize there isn’t a wild in the game? It seems to be the kind of theme that would require one, don’t you think? It’s not there though, and instead you’ve got other symbols to watch out for. These all give you special features. For example, any winning combination will give you a third reel respin for free. The multiplier indicator will increase for each win too, meaning you can win more and more if you manage to get more wins.

Have you found three dart boards scattered over the first, second and fifth reels? If so, you get to pick a dart board to win a prize. It’s that easy. Next up is the alcohol. Three of those on any but the middle reel will get you 10 free spins. The center reel also goes completely wild for all of those spins. Finally, you have a biker race to unlock by getting three appearances of the biker with the mustache and sunglasses. These have to be on the first, second and fifth reels. Pick the biker you want to support and see where he finishes in the race. The better he does, the better your prize!

Don’t argue with the bikers – this game really does deliver the goods.
Play Now