Come Face to Face with the Pharaoh King 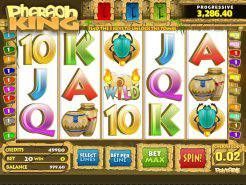 Play Now
Betsoft has resorted to an old and familiar theme with this particular slot game. We’re deposited in Egypt here, more precisely Ancient Egypt, and that means you have a chance to explore some of the features this time in history has to share with us. Here, of course, that means sharing prize-winning symbols and opportunities as well, so why not take a look?

We have a 20-line game here based on five reels.

The betting options allow you to play five coins per line, and you also have a chance to choose from two cents up to 50 cents per coin.

The wild is presented as the word, and it replaces most other symbols. It doesn’t replace the scattered pyramids though, which can pay in any position with two or more on the reels. The wild won’t stand in for the scarab beetle either, which is capable of winning you the jackpot. However, be aware that five of these would only trigger the jackpot if you are playing with the maximum bet on the successful spin.

There are three keys to be found in this game too, and they appear in red, blue and green. Every time you find one, it will be kept at the top of the screen. In this sense, you don’t have to find all three in a spin – you can find one, keep it and then look for the others. Once you have all three, the bonus feature will begin on another screen. This is called the Unlock the Tombs bonus. This allows you to choose from six urns that are in front of you. Five of them have credit prizes, while the sixth simply says collect. That ends the round. You then return to the main game where you can once again try to collect the three keys.

This is a nice game, although we missed the ease of play that comes with having an autoplay method. However, it has the basic elements you will enjoy with a game like this, including a progressive jackpot. It wasn’t that big when we visited, but you never know how high it might climb. Will you have a chance to capture it on your trip to the Ancient Egyptian pyramids?
Play Now