Explore the Delights of the Ocean Life Slot 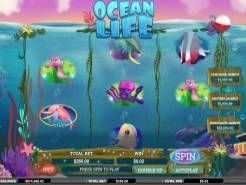 Play Now
Diving into the ocean to play this kind of themed slot is not exactly new territory. However, Arrow’s Edge has created an online slot here that really is worth looking at in more detail. You’ll see the surface of the water on the screen, but you will also see a variety of fish and plants beneath the waves. The reels are not as obvious as they are in some slots, which make the look and feel of the game much more realistic.

What can you expect in terms of reels and pay lines?

This is a basic game, with one pay line across three reels. Even though you may see as many as six symbols on the reels, it is only the middle pay line that will pay out when you get a winning combo on it.

How much can you bet on Ocean Life?

You can wager between one cent and $250 on that single pay line.

Does this online slot game have any valuable symbols?

It has a pink-colored dolphin which is the wild symbol. One of these completing a winning line will double the usual prize. If you have two dolphins plus another symbol, the relevant prize is given a 4x multiplier.

Could you unlock a bonus level of some sort?

There is a bonus shark that might appear as you play. If it comes up on the center pay line, you will enter a bonus feature. Here, you have to pick from 12 fish and watch as they swim to one of four underwater areas. Once three fish swim to the same area, the bonus round ends and you win whatever prize is associated with that area.

This game is really good for a three-reel, one-pay line offering. In fact, you may forget it only has one pay line, thanks to the good bonus round and the presence of three progressive jackpots as well. These jackpots can be triggered at any time, so you never know whether you might be the lucky player to do just that. There is a Cash Grab Jackpot which regularly hits, and a Super Slots Jackpot that is less common but is the biggest prize of all. Finally, you could get the Mystery Jackpot, which again will hit at a random moment as the jackpot reaches 10,000 coins. Try the game today and see just how many features it has!
Play Now