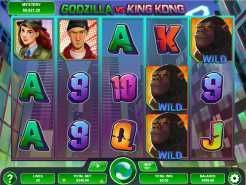 Play Now
Few titles of slot games have promised as much as this one does. Yet here we are… ready to see what this one holds in store for us if we are prepared to give it a try. Godzilla vs King Kong is now ready to play, but we suggest you check out our full slot game review before doing so. It highlights all the perks and drama of this intriguing game.

What is the name of the slot game developer?

This game was created by a well-known company called Arrows Edge. Their games all have a similar appearance in the way they’re designed, and that same feel is evident here too. It works well, as you’ll soon see.

Demo options to think about

The game does pack a lot in, which makes it even more important to understand how everything works. For that reason, trying the demonstration version is a good way to get started.

This game offers a mix of themes

Both title characters highlight a movie-themed slot here. Or perhaps this is a monster or animal theme. We guess we could say all these things are true, which lends this slot an unusual stance.

Design elements to look for before (and during) play

Arrows Edge doesn’t go in for 3D slots. So, we have the usual 2D graphics in action in this game, and the color palette and design features are quite familiar to those who have tried other games from this developer. We like the look and using the same layout for the game controls makes everything easy to find as well.

Getting back to basics

Let’s begin by going through the basic features you can expect to see in the game. With five reels, you get a formulaic layout that adopts three symbols per reel. Nothing unusual there. You’ve got a mystery progressive jackpot in action, seen just above the reels, although it’s not a mystery at all because you can see how much the current total is worth. We figured Godzilla and King Kong would have vital roles to play and we were correct. King Kong is the wild, standing in for most other symbols. There are just two others he cannot sub for. Godzilla is one, appearing in the game labeled as BONUS. An airplane is the other, appearing here labeled as FREE SPINS.

There are 20 fixed lines to bet on for each spin of the reels.

The up and down arrows either side of the bet amount raise or lower the amount wagered per spin. You can move between the smallest 40-cent value and the biggest $240 value.

Where is the paytable?

There is a question mark on the left side of the screen under the reels. This reveals the paytable when you select it.

There are two bonus features to look forward to

One can appear on any spin and is called Rescue People. These people are shown as two reporters (a woman and a man) and a nurse. If you get one of each appearing anywhere in view on a winning spin, the prize will be boosted by a randomly awarded multiplier. There are three potential values – 4x, 5x, and 6x – so this could be a good find. The other bonus is the bonus round proper – the Titan’s Duel Bonus. This is the part where Godzilla goes up against King Kong. You’ll want the mighty lizard to beat the ape too, as this means you’ll secure a larger prize from the round. With a maximum of five rounds to progress through, try and go as far as you can.

Is there an opportunity to secure any free spins?

Yes, you can do so by finding three or more of those airplane free spin symbols during a base game spin. Three, four, or five or those would grant you seven, 10, or 12 free games. The wild gorilla can appear during these games, and it may randomly turn into an angry ape. If this should occur, it changes to roar behind bars, and becomes a sticky wild, too. Any sticky wilds you obtain during the spins stay in those positions until you have played through all the freebies.

No return to player value is yet known

We’ll let you know the percentage should it become obvious.

Does Godzilla vs King Kong receive a good rating from our team?

It does – we couldn’t rank this lower than 9 out of 10 points given its many complex features. Despite that complexity, it is an easy and enjoyable game to play.

How long before we get a mystery jackpot winner?

Despite there being lots of prizes in the paytable, the mystery progressive jackpot is the one we’ll all have our eyes on. If someone should net that, you can bet we’ll hear about it and share it here.

The demo game allows access to check it out

This is an entertaining game and one that we think should garner plenty of fans. There is no need to be a big fan of these characters to enjoy it either – something you’ll see is true when you try it.

Are you going to play the real version of the game?

Look for a casino offering Arrows Edge slots and see if this one is available. It should be, and you can then try the real thing if you wish.

As a new Arrows Edge title, you can play Godzilla vs King Kong across Android and iOS mobile platforms.
Play Now