Try and Grab a Slice of the Genie’s Fortune 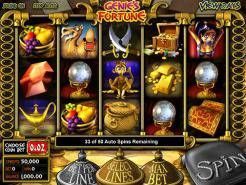 Play Now
Any kind of fortune would be nice to have, wouldn’t it? A genie’s fortune, though… well, you never know how much that might be worth. Genie’s Fortune is the title of a Betsoft slot game that is definitely among their top titles. It benefits from 3D images and lots of perks and special features, so you will want to find out more right now.

You have 30 lines in action to bet on over five reels.

Betsoft does like a default value of 10 cents on their coins. However, they give you the chance to reduce this to two cents at the lower end of things and to raise it to a dollar at the top end.

The magic carpet is the wild. If you get it on the first reel (it can appear anywhere) you’ll get a bonus credit payout. The monkey can appear in the center position on the middle reel and when he does, he will trigger the Click Me Crazy feature to win you some instant credits.

Fancy finding three treasure chests? If you do, you will be amply rewarded with a selection of free spins – either five, 10 or 20. The number is dependent on getting three, four or five of the chests respectively. And what about the genie’s lamp itself? Well, if you can find three on a payline you will reach the second screen and the associated bonus feature. You get six wishes to choose from once the genie is released. Keep choosing for as long as you can to reveal as many prizes as possible.

This game comes packed with an autoplay feature so you can sit back and watch the fun. It also has cool graphics, although the one thing we didn’t like was that thick lines appeared to indicate every line you are betting on at the start of every spin. If these disappeared, we’d love it! That is a small nitpick though, and the rest of the game is really cool. If you manage to trigger some of the special features the creators have included in it, you will enjoy the results. Make sure you play to get into that bonus feature if you can, as big prizes could await you there.
Play Now