Dig Yourself Up Some Aztec Treasures! 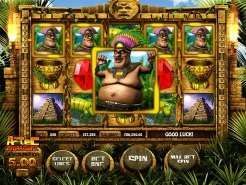 Play Now
It seems as though the world of the Aztecs has inspired plenty of slot developers, as this is far from the only slot game you will find out there today with this very theme. There is another one with a similar name too, but here we are talking about the Aztec Treasures slot game created by Betsoft. Will this be your preferred Aztec slot to try out?

This game packs in a nice amount of paylines, with 30 of them to bid on as you play. And you’ve got the usual number of reels as well – five of them are in action with every spin.

Well, it’s not a penny slot but it’s as close to one as you can get. Just two cents a line are playable with this slot game, and you can increase your coin value as well, rising to as much as $1 a line. You’re also able to play more than one coin per line – up to five at a time if you like.

There are three Aztec characters in this game, and if you get one of each on the three middle reels on either line one, two or three, you can get a Kiss Me wild reel feature. It’s also worth getting a spear on the reels – just one or more will transform one of the other icons on the screen into a wild.

We haven’t mentioned any bonuses yet, but there isn’t just one here – you’ve got two. A minimum of three huts will trigger the Love Hut bonus to play on another screen. The second feature is triggered by getting one of each of the gem stones that appear on the reels. When you do this, you will gain access to the Secret Room second screen game. And as if that wasn’t enough, it’s also possible to gain some free spins. You need at least three geckos to trigger these – with a chance to win an incredible 20,000 coins as well.

Wow, this game really does pack in those special features, doesn’t it? You’ll want to give this one a try, and while it does have a freeplay mode we recommend trying it with some real bets. This is the only way you will manage to win some real cash!
Play Now