Go Back to the Eighties with the Arcade Fortunes Slot 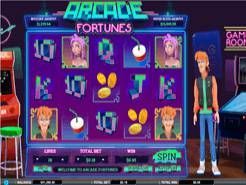 Play Now
Whether you were around in the Eighties or not, this game really sets the tone for that decade. Arrow’s Edge has come up with a superb winner here, with neon colors and plenty of relevant symbols to look out for as you play. Will you be able to play one of the arcade games included as bonuses aside from the main game?

So, what about the number of reels and paylines in action?

You’ve got a more unusual combination in play here. There are five reels but you get just 18 paylines in all.

Does the game appeal to low-budget players?

It sure does – you can start at just one cent per activated payline and go up from there. You do have the chance to place higher-valued bets as well, so this game should appeal to lots of people.

Which special symbols should you look for when playing Arcade Fortunes?

Remember the gum you’d chew and pop? Well, that can appear on the fifth reel while you are playing the game. That doesn’t sound too exciting, but wait for it – when it does appear, it will pop and send some gum onto as many as three other places on the reels. Those places will then be turned into sticky wilds. They will also remain where they are while the rest of the reels re-spin three times. And if another piece of gum appears on the fifth reel during a re-spin, you get some more sticky wilds as well. The game also features a scatter, which takes the form of an arcade machine. This has the power to unlock the bonus if you end up getting three or more.

For starters, you get to choose one of two bonuses. These are the Skee Ball bonus round and the Galaxy bonus. This means you can play the game for a while and trigger the bonus twice, choosing a different option each time. You get three prizes from the Skee Ball option and one from the Galaxy option, but the latter could potentially be bigger than the three prizes from the other bonus put together. You never know!

Download and play Arcade Fortunes today to see if you can trigger the progressive jackpot too!

Yes, there is even a progressive jackpot in play, aside from the chance to win 2,000 coins as the top payout amount in the main game. Check out this brand new and exciting slot game today!
Play Now