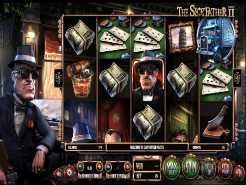 Play Now
Many players will smile when they see that title – The Slotfather Part II. It tells us the game is a sequel to the original and highly popular The Slotfather slot. Did you give that one a try? You need not have done so to get the chance to play this one, although it does set the scene for what lies ahead. We aren’t going too far to say this slot is a delight, packed with action, intrigue, and drama. Oh, and the chance to score some neat prizes, of course. Will you enjoy what you find here, and if so, will you play this one for real? Check out our review to learn more now.

Let’s discover the basics about the game

We have always liked 3D slots, ever since the early attempts to create them came out. We’ve come a long was since those early days, resulting in impressive games just like this one. This would make the perfect introduction to 3D slots, but it also makes an excellent game if you want to try another one.

Created by one of the most famous 3D slot developers around

Were you thinking of Betsoft? If so, you got it right. They did create the original game too, of course, and so they have now brought us the sequel.

You should find the demo version available at all good casinos offering Betsoft games. If you are fortunate, you will see you can try the game without even logging in – some casinos do offer this feature. There are lots of elements to consider when playing this slot – lots of features to note. Trying the demo allows you to find out more about them.

The original game was based around gangsters, and we return to that theme here as well.

Do they give us another good game design?

They do. Betsoft never lets the side down and they have not done so here either. The Slotfather always keeps an eye on proceedings, and he does so here as well. Lots of other gangsters might appear as you play, but we will come to that part shortly. The one thing you should appreciate here is the detail given to every element of the game. You cannot fail to be impressed by this one.

Slot game type – details and features to look for

Firstly, we should say there is no progressive jackpot involved in this game. However, there are lots of other features we think you will appreciate here. The game works on the usual five-reel format with three symbols cropping up per reel. There is an all ways pays format for this game too. You won’t have any issues seeing the wild icon whenever it appears, as it says WILD on it. It can appear on reels two and four in a regular spin, but the free spins will allow it to appear on reels two through to five, with just the first one out of commission. We get a scatter to look for as well. This is a truck, clearly involved in some shady work by the look of it. Just two are needed to drive you towards a scatter prize, but you will want three or more ideally, as this is the secret to claiming some free games. The game also introduces three gangsters. We guess they work for the Slotfather. They all have names and each one can appear in full height format over an entire reel. These have the potential to trigger bigger prizes and some other features as well, as we will shortly see.

Paylines are not present

No – the all ways pays format means we will be able to bet on 243 potential ways that prizes could appear on each spin. We must cover them all as this is the default option for this type of game.

How much could you bet on this game?

It is important to understand your possible bets when playing The Slotfather Part II. Since this is a way wins game, each spin works on a multiplier worth 25x. It means you will bet 25 coins at a minimum on each spin. The smallest coin is one cent, so a quarter is the lowest bet you can make on a spin. There are other coins available too, and you can also go for a higher bet level. The bet level denotes the quantity of coins played, from one to five. Five coins of your chosen value would be multiplied by 25x to get the bet for that spin. Got it?

The paytable is worth reading before you begin

You will see there are a few pages to contend with each, each containing some nice surprises. You can review what each prize combo is worth, and what the various bonuses and special features are like. Everything is very nicely explained, and you can access it all by selecting the question mark in the bottom right corner.

Does the game include a bonus round?

Yes, there are several features worth noting in The Slotfather Part II. Firstly, there are some Gangsters Respins to go for. If two full-height gangster symbols – they must be the same gangster in each case – appear in the same base spin, you will see those gangsters stick where they are. Everything else will then spin again to see if one or more identical gangsters show up. If they do, you can expect some nice prizes to come your way. There is also a Gangster Feature, accessed by finding three identical gangsters in full height format on the reels in the same spin. This takes you to a second-screen bonus. A table is in front of you and it has several folders presented on it. All but one of the folders contains a prize amount in credits. The remaining one will say COLLECT when you open it. The idea is to select as many and win as many credits as you can before that message appears. When this occurs – and hopefully you will have selected all the others before it happens – you can rest assured the game will calculate your total credit prize before returning you to the main game.

Can you net any free spins?

Yes, as we discovered earlier. You will need three or more trucks scattered over the reels to get these. Three will get you eight spins, but four or five respectively would earn you 12 or 20 free spins. The relevant scatter prize is paid out as well. These games will enable wilds to show up on all reels potentially, except for reel one. Scatter prizes are doubled in these spins, along with the standard prizes. There is also a chance to net some more free games if things go your way here. Finally, the Big Boss Bonus is triggered after the free spins are complete. This is automatic and it will bring you a random prize in credits after playing the games. This is guaranteed… you simply don’t know how big the prize will be. Intriguing!

What is the RTP for The Slotfather Part II?

This game has a nice RTP of 96.60%. That ranks higher than many other slots online right now, although it is not the highest of all.

If you know what we like, you will know this game is right up our street. However, we should review it as impartially as possible. That is difficult to do, but we found ourselves trying to think of reasons why we shouldn’t award it 10 out of 10. We could find none, so that is our score.

Do we know of any big winners for The Slotfather Part II?

No, but that is not surprising given that the game is not a progressive one. Without that jackpot to tempt people, there are few headlines to be made. Don’t be fooled though – the game still provides you with lots of reasons to play and lots of prizes to shoot for.

Play just for entertainment purposes via the demo version

This is great to do if you have some time to kill, you want to have a good time, and you are ready to enjoy everything The Slotfather Part II can offer you. Even if you intend to play the real version of the game, starting out like this means you will know roughly what to expect.

Play for real at your favorite Betsoft casino today

If you know an online casino that uses Betsoft software or has some of their games available to play, you will likely find this game in their collection too. Consider joining so you can get started with the real version of the game if you wish.

The game looks terrific on a larger screen, but smartphones and tablets also provide players with a good experience. The detail looks impressive on those as well, so you can always appreciate the game no matter how you choose to play it.
Play Now