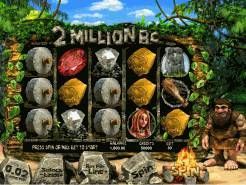 Play Now
Can you imagine what it might have been like to live in 2 Million BC? It’s a hard thing to imagine, isn’t it? You can however get an idea of it simply by playing the slot game Betsoft has created that goes by the same title. Head on back to the Stone Age today and give this game a shot!

This beautiful 3D game starts with a cut scene at the beginning before taking you to five reels and 30 paylines.

You can choose from a number of coins valued at between two cents and 50 cents. You also have a chance to play between one and five of your chosen coins per line.

Special symbols in play in 2 Million BC

The fire symbol is a good one to watch for, as you will see in a moment. Acorns and diamonds are also worthwhile, but you don’t have a wild symbol in this game. Don’t worry though, there are plenty of chances to win in other ways.

At least three fire symbols award you with free spins. You can re-trigger this during the round as well. Elsewhere, three or more acorns will trigger the Saber Attacks feature. This is a second screen feature that enables you to help the caveman aim at the tiger. If you help him knock it out, you will be rewarded with instant credits. Finally, if that wasn’t enough you can try and win some more prizes with the diamonds. Three or more of these will grant you the Diamond Bonus. This means you have to try and help the caveman steal a diamond from under the nose of the tiger. There are various ways to do it – which one will you pick and will you get lucky?

Yes, this really is a sensational game and it is a lot of fun as well. If you have a chance to play it for a while, you could well trigger one or more of the special bonus features it has to share with you. That is more than enough reason to give it a try, don’t you think? Get to grips with the past today by giving yourself a spin with 2 Million BC slots. You will be very glad you did!
Play Now